Massachusetts is famous for many things. It’s the starting point of artists like Aerosmith and Rob Zombie. It is also the birthplace of President John Kennedy. But if you look at history, the most remarkable was the landing place for the pilgrims arriving on the Mayflower.

“We’ve played all over the world, and I can tell you there’s nothing like a show in Massachusetts. We love Boston and Worcester fans,” enthused Adler. “We are totally prepared for two amazing shows at Rascal’s and Mix 360.”

Massachusetts is also recognized as the birthplace of Thanksgiving. Adler and his exciting rock n’ roll elite band are ready to pass on their thanks to fans across the great state by bringing an adrenaline-fueled stage spectacle that will leave audiences in a state of ecstasy.

“Fans expect a true Guns N’ Roses experience, and that’s what we deliver. You’ll hear all your favorite Appetite For Destruction hits from world-class rockers,” adds Adler, who was inducted in the Rock n’ Roll Hall of Fame in 2012 and is listed as one of Rolling Stone’s 100 Greatest Drummers.

But the show is more than just an epic evening of drumming. Steven Adler’s band features the incredible guitar work of Michael Thomas and Alistair James and the astonishing vocal dexterity of vocalist Ari Kamin.

“Come to the show at Rascals or come to the show at Mix 360 and you are guaranteed a legendary rock night. Better yet, come to both shows. We would love to see you there and spend some time together. You will not be disappointed!” said Adler. 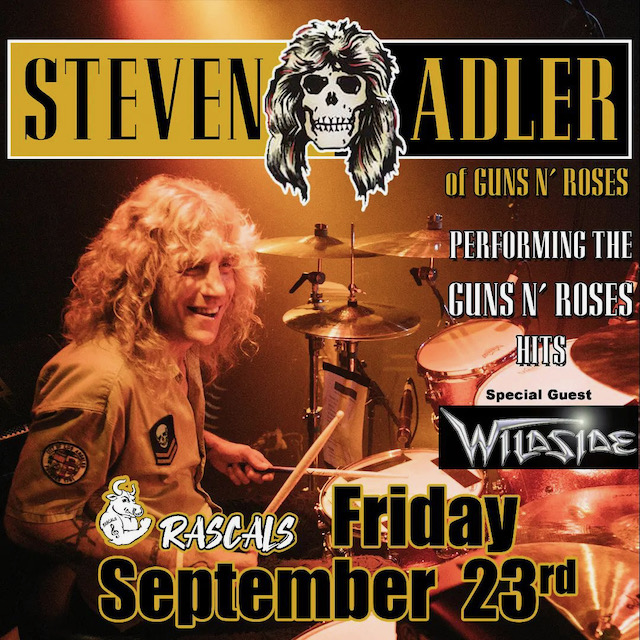 Rascal’s is located in Worcester at 70 James Street. It is considered one of the best live music venues in the state. For tickets for the September 23 show, go here. 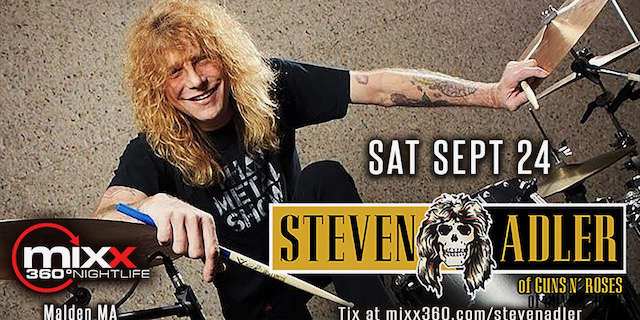 Mix 360 is also known for its stellar bookings, bringing together top rock bands from across the country. Mix 360 is located at 655 Broadway in the Boston suburb of Malden. For tickets to the live Appetite For Destruction experience on September 24, go here.

Steven Adler and his band are actively booking gigs across the United States. For up-to-date information on the incredible slate of upcoming shows, visit Steven Adler’s Facebook page.